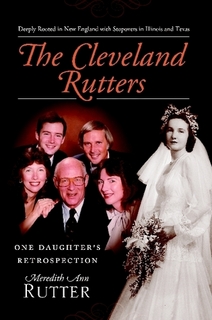 When I self-published The Cleveland Rutters, a retrospection-slash-memoir, in March 2011, I intended it to be read mainly by family and childhood friends. Feedback has convinced me there is a wider audience, those who gravitate toward the genre of biography/memoir.

My deceased grandmother and longer-deceased mother helped me write the first half of this book. They did this by saving postcards, a diary, photographs, and letters that helped me re-create many moments between 1916 and 1964 (the year Mom died at age forty-four from “the worst case of cirrhosis of the liver” the doctor had ever seen). Then 1965 to 2008 were up to me.

In addition to the family chronicle, I worked through my own experience of my mother’s struggle with depression and then her death. My dad, devastated by the loss of his wife, was nevertheless determined to keep the family together and meet the future proactively. He remarried eighteen months later, and then again, and then again, over the course of the rest of his life. After his death, while writing the book, I faced my deferred grief for my mom.

This book, which contains over 180 photos, will be enjoyed by readers interested in family tales, life in the twentieth century, parental loss, and divided loyalties.

A couple excerpts are provided below the information on where to buy the book.

The book is available in either hardcover or paperback from Lulu.com (http://www.lulu.com) –which gives me a much better royalty than the other guy, but up to you!–and from Amazon.com (http://www.amazon.com).

Excerpts from The Cleveland Rutters

Chapter Title: Except on the Mantel

Except on the mantel, according to Dad, everything in Nana and Bubba’s home was chipped. He may never have said that, but he believed it. As I sorted through their things after Bubba had died and later Nana had to go into the nursing home, I learned that if chipped meant “in need of repair or in some way not as right as it started out,” Dad’s insight about his in-laws’ possessions was pretty much true.

The antique glass-front bookcase had a broken leg, held in place by the weight of the contents. On top of the bookcase, the nodding-head figurine of an old woman with reading glasses, two books, and a quill pen was chipped at the top of her robe. Still, she could nod. Nana was fond of touching the tip of her index finger to the hard china hair to set the disembodied head in motion.

Growing up, any time we kids went over to the mahogany captain’s table to get a candy out of the lidded, pressed-glass dish, Nana would remind us, “Be careful with the top.” I was astonished, as a grownup, to discover that the oh-so-protected candy dish had a few teensy chips on its rim.

Hairline cracks could be seen in several water pitchers and also on the back of the ashtray that asked, in old-English script, “Who burnt our table-cloth?” There was a cigarette burn on the arm of Nana’s period wingback chair, a neglected ash having fallen as she reached for her whiskey sour on the little side table. Another cigarette burn was harder to see within the crewel reupholstering of a beloved chair that we had been discouraged from sitting in. The oil painting that reminded Nana and Bubba of Barbara, their long-deceased daughter and my mother, had become more and more yellowy over the years as cigarette smoke caked it with tar residue.

If you extend chipped even more metaphorically to include “stolen,” there was the framed pen-and-ink picture in the bathroom upstairs, that Nana once admitted to me she had confiscated from the bathroom of an acquaintance many years before. Its predominant color was blue, and it showed a little boy in a sailor suit leaning over the edge of a four-legged bathtub. A poem next to the picture started out “Rub-a-dub, scrub-a-tub …” Before I knew the truth about its origin as stolen goods, that little scene had always brought a smile.

Because Nana’s collection of English Royal Doulton special-issue plates were hanging on the wall, they were among the few chip-free items in the house. There were two Sir Roger de Coverleys and one Queen Elizabeth at Old Moreton.

And on the mantel, which we all knew to avoid, there was indeed a flawless piece—an ironstone platter from Bubba’s family. This platter was, Nana said, increasingly valuable because of its flowing-blue design. She had received it as a Christmas gift in 1931 from Bubba’s sister, Agnes (my mother’s “spinster aunt”).

Also on the mantel, and flanking the perfect platter, was a matched pair of double-handled Minton vases that Nana had purchased at auction. Each vase was thickly enameled on a dark blue background with green-leafed, white-flowered plants rising from a brown cross-weave pattern near the base. Folded and tucked into one of the vases were two yellowed newspaper clippings wrapped in waxed paper. One clipping recounted the history of the Minton family and their designs. The other identified the Mason family of Taunton, Massachusetts, as the prior owners of the vases. These vases were a pride and joy for Nana. If she knew that some of the tiny green leaves were chipped, she never let on.

The coziest room in my husband Gary’s and my first single (non-duplex) home together was a mahogany paneled den large enough to fit comfortably a full-sized, overstuffed rattan sofa; a rust-velvet, Danish design recliner; a glass-inset oak coffee table with matching end tables; and an embarrassingly oversized Mitsubishi television in mahogany casing. In 1988 that large screen required a housing nearly five feet by four feet by three feet. Despite all the oversized furniture, we had an unobstructed view of the red-brick fireplace next to the TV. This was a large room with cozy charm, and we spent most of our evenings here. One night, with our wine and popcorn, and our beloved orange cat Redford in my lap, we were watching the Swedish film “My Life as a Dog.”

I started getting weepy. Who wouldn’t when a dog dies? In fact, the movie had already moved on from the dog dying and was now at some uneventful stage—maybe even the rolling of the credits. At first I didn’t think anything about those tears that were welling. Now in my forties, I’d pretty much finished with crying except in response to the magic in books and movies. My dad had been the role model for tearing up when a child or animal was hurting in a movie, so there was nothing but precedence for getting weepy in this setting.

But my tears didn’t stop with the welling. Suddenly I was making little choked noises, and my inner observer wondered at this shift. Seconds later I was sobbing. My whole body, heaving, had jumped into sorrow and was denying me air. With my hands covering my face, my body shaking, I lurched forward to force the recliner upright so I could double up with my agony. Redford leapt to the floor—taking the last circle of comfort with him. Gasping, out of control, I knew I needed to let it be, to go with it. I waved my arm toward Gary and pushed out the words, “I don’t know what’s happening. I just need to do this. Just let me do this.”

I was engulfed in the sadness of a deep loss that I had avoided acknowledging for over thirty years. Even now I couldn’t see the sadness as mine. It came to me as empathetic pain for the twelve-year-old boy in the film. Still, I felt his pain so deeply that I knew it was more than empathy. I knew it had to be me. After five grueling minutes, wiped out, I stopped. I couldn’t talk about it, and uncharacteristically, Gary didn’t push for a conversation.

Almost twenty years later, in between career moves, I started writing this memoir. My dad, at eighty-eight, was suffering with increasing dementia. For many years now I had put off reading more than a few of the letters Mom had written to her parents, my Nana and Bubba. The whole collection had been biding its time next to my grandparents’ photo albums on an upper shelf in my closet.

Now I found time to pay attention. There were many years’ worth of letters. I started writing an assemblage of biographical material about my parents, grandparents, and siblings mixed in with autobiographical material about me. Some of my memories overlapped with those in the letters, but more of my memories were selected from those I had been replaying all my life from childhood and well into adulthood …

To give my psyche some space to do its unseen work, I didn’t look at the manuscript again for a couple months while I finished up some other tasks. Then one morning I woke up remembering my despair in that cozy den nearly two decades earlier. If there was a point to be made, that was probably the tip-off. I had remembered the scene off and on over the years, but for some reason I had gotten through the entire first draft without it resurfacing as something to be attended to.

Teeth brushed, contact lenses in place, hot coffee in hand, I went upstairs to my loft office. My computer stood ready. I opened Netflix and typed in “My Life as a Dog.” I read the synopsis and the member reviews. This refresher course had the effect of targeted strikes by acupuncture needles—there was no pain but connections were made. Oh, the boy’s mother had tuberculosis! She went into a sanatorium! The children were separated! The young boy lost a mother! Here was not exactly my story but here was surely my love and my loss.

The big question remained. Why had it been easier for me to empathize with that fictional boy than it was to empathize with myself? The answer would lead to a deeper understanding of the forces that drove my parents and, in the filtering, drove me. As I worked along, peeling the layers, I finally had the answer. And in the process I also found the freedom, at last, to love my mother again.

4 Responses to Book: The Cleveland Rutters