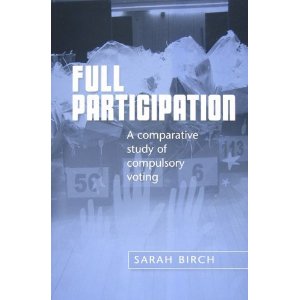 Have you ever heard of this concept of compulsory voting? I never had. It took a chance meeting and conversation in the gardens at the Palace of Versailles with a couple from Australia to educate me on this one. (Don’t you love it?) As civil servants in their country, both the man (fire department) and the woman (police department) were very much in favor of compulsory voting, which is not only a law there but an enforced law. You are fined $300 if you don’t vote.

Since returning from vacation, I’ve asked several people if they ever heard of compulsory voting, and usually the answer is no. I think it’s time we had a conversation about it! We’re all aware of the growing schism in this country between the haves and have-nots, and I’m thinking that compulsory voting, enforced, could help us narrow that gap. That was the Australian couple’s point, and it made great sense to me.

Wikipedia (see Compulsory Voting) has a good summary on the perceived pros and cons. It looks to me like the reasons to go that route far outweigh the reasons not to. Maybe Australia’s $300 is too hefty a fine, but there are other ways to encourage compliance besides or in addition to (a smaller amount of) money. In fact, I’m wondering if just the fact that it would be a law might result in a better voter turnout than our current situation without such a law.

After reading the Wikipedia information, I wondered whether a stand-alone book or book chapter had ever gone into the subject, and if so, when. Ta-da. I was not disappointed to learn that in 2009 the United Nations published Full Participation. (The author is listed as Sarah Birch, but I think she’s representing the U.N.) Probably any books published by the United Nations never get trailers done as part of major marketing plans. That’s a shame, because I think this is a topic that we voters in this country should take a look at. One way I can encourage the conversation is by writing this blog post and highlighting the book’s existence. I would love to read any comments if you have experience with or opinions about this topic. Also, don’t forget the “Share” button here; use it to inform others in your own circles about this concept.