The Book Review Section That Stumped Me Too Much 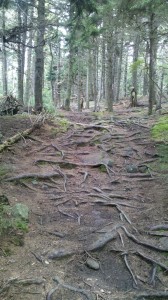 Trees require roots and sentences require words, but some parts are tougher to navigate than others.

Every now and then–and it’s not difficult–I like to make other people feel smarter than me (or should that be, “than I” [do]? Too formal even for grammarians these days?). Anyway, I was happily reading along in the New York Times Book Review a couple weeks ago when a certain two-syllable word stopped me. It was a word I’d seen hundreds of times before and “thought I knew” but in any case had never let it stop me. But this day, I decided to look it up.

Here–in a review by one Cynthia Ozick of William Gass’s new book Middle C–is the sentence that harbored the word that stopped me: “Of all living literary figures, William Gass may count as the most daringly scathing and the most assertively fecund: in language, in ideas, in intricacy of form (essays zigzagging thought); above all in relentless fury.”

(Maybe I let the word stop me because I needed to breathe while reading that sentence.) Merriam-Webster online informed me that fecund means “1. fruitful in offspring or vegetation : prolific. 2. intellectually productive or inventive to a marked degree [as in] a fecund imagination” and therein, with the second definition, I had my answer. The trick now is to remember it.

For some reason the entire NYTimes Book Review that Sunday stumped me often. Maybe the reviews weren’t very interesting, but I decided to track down the words that I’d always skimmed over before but couldn’t swear I knew them. Now here’s where you can really shine and pat yourself on the back. How many in this list, sans context or multiple-choice options, can you confidently state an approximate definition for? I looked up each one of these. To be nice, I’m including their contexts. (Note to way too many of my friends: I do assume you know them all, and yes, I’m terribly embarrassed.)

1. fecund (See context above.)
2. numinous (“It [a certain antidote] saves you–or was it perhaps something more numinous?”–reviewer Parul Sehgal)
3. debouches (“…the point where the story of the individual debouches into the narrative of the nation.”–reviewer Parul Sehgal)
4. aphorisms (“Quite possibly, too, the novel is overly self-conscious about speaking back to the past, and it sometimes devolves into aphorisms, as when Winkle insists that the dead and their deeds are ‘all here, all connected, all the time, regardless.'”–reviewer Major Jackson)
5. opprobrium (“Rather than disapproving opprobrium and diatribes, this debut occasions celebration.”–reviewer Major Jackson)
6. iconoclasm (“Iconoclasm begins as one–the loneliest number.”–reviewer Rachel Kushner)
7. elegiac (“If Patti Smith’s recent memoir, ‘Just Kids,’ detailing her own start in downtown New York, is a more controlled and elegiac enterprise, it is also a final burnish on Smith’s past.”–reviewer Rachel Kushner)
8. capacious (“In this capacious, frank and warm-hearted memoir…”–reviewer Louisa Thomas)
9. pullulations (“What seizes [the character]…, what claws at his brain, are the pullulations of all the world’s evils.”–reviewer Cynthia Ozick)
10. fructify (“He sees how pain and wickedness fructify, even as his mother’s increasing skills proliferate into the busy contradictions of a garden teeming with blooms and larval infestation.”–reviewer Cynthia Ozick)
11. venal (“There are dishonest cops, smug prosecutors, a feckless defense lawyer (now a judge) and venal witnesses.”–reviewer Abbe Smith)
12. polemic (“Notwithstanding the book’s unfortunate title, which suggests a polemic, ‘The Injustice System’ is really a love story.”–reviewer Abbe Smith)
13. solipsism (“Solipsism reigns unfettered in North Korea, alongside gross poverty, fear of imprisonment and a growing dissident movement that’s managed to smuggle out what little we know about the travesties prosecuted in this loneliest of states.”–end-page essayist Fiona Maazel)
14. misanthropy (“In essence, how to breach the misanthropy of a country just for getting its street names right?”–end-page essayist Fiona Maazel)
15. demesne (“I happened on Google Earth a few years ago while reading up on Scientology and, O.K., John Travolta and his demesne, which apparently can accommodate two private planes.”–end-page essayist Fiona Maazel)

‘Fess up in the Comments, please. Or gloat. I can take it.