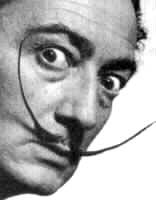 It was Sigmund Freud’s The Interpretation of Dreams that set Salvadore Dali on his life-changing path when he read it in 1925 while attending art school. I learned this from one of the instructional plaques in the Salvadore Dali Museum in Clearwater, Florida.

Atomicus photo of Dali in studio by Philippe Halsman

Dali described Freud’s book as “one of the capital discoveries of my life, and I was seized with the real vice of self-interpretation: not only of my dreams but of everything that happened to me …” Four years later, Miro introduced him to the art form of surrealism.

Over the years I’ve thought about what book I might name as having been life-changing for me. It’s a question that readers love to ask each other. When I started drafting this particular blog posting, I decided to name The Peter Principle (Peter and Hull, first published in 1969).

It provided an all-important cautionary note about how, in a bureaucracy, people can rise to their level of incompetence and then stay there because no one wants to fire them (thus being incompetent and ruining things for other people the rest of their working life). Ouch! I do think I have spent my working life trying very hard not to reach my personal level of incompetence. (It may help to switch careers as I have…)

Yesterday I finished a book that I’ll tell you about in a posting later this week that I know I’ll call life-changing as well. In the meantime, dear blog-reader… care to name your life-changing book(s)?

6 Responses to What’s Your Life-Changing Book?