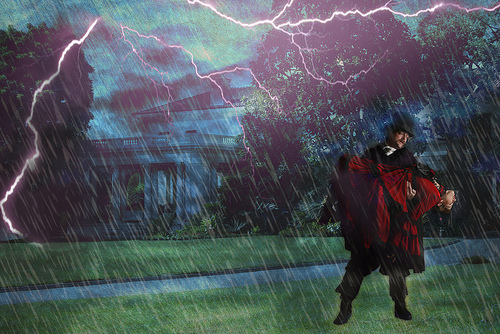 This image is titled “Saved!” by the artist. It puts me in mind of some combination of Gone with the Wind and Hush, Hush, Sweet Charlotte. Recently I was hoping to be saved by finding a free source of one-paragraph summaries of classic novels to reproduce for one’s own purposes. Well, not. When Amazon or Barnes and Noble or Wikipedia or Cliff Notes, for instance, shows book summaries, either they own the copyright to the wording or the publisher does, or the summaries are so lengthy as to require real thought-time to read and can hardly be grocked in a mere moment.

This realization was forced on me recently when my husband’s company developed a need for brief summaries of a hundred-some classics. Hubby and I Googled. Everything we found had been written by people paid by a publishing house or website. One can’t just pick up the paragraphs and use them to sell something that doesn’t benefit that publisher in some way.

As we have struggled, hopefully somewhat successfully, with developing 60-90 word summaries of our own, I found that by reading publishers’ and readers’ comments on plots and characters and themes in various classics, I’m getting quite an education. What an extraordinary array of intriguing storylines and characters! Not for the first time, I wish I’d majored in English in college. (Note: That’s different from having a regret that I majored in zoology. I just want both majors to have happened—and magically, of course.)

Here’s an example, a brief summary of The Secret Garden by Frances Hodgson Burnet. I read this book in fifth grade and it was one of the first books to convince me I needed to read for fun.

At least now, my husband’s company owns the copyright to over a hundred summaries of classics. Let me know if you need to use them. We promise, they’ll come cheap.