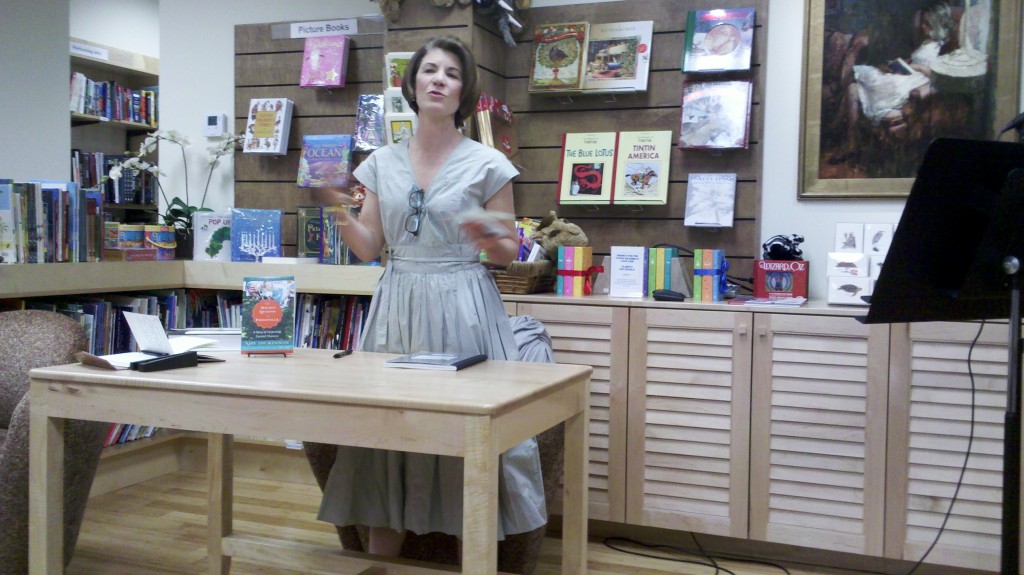 I attend book signings to get a feel for how different authors handle that aspect of self-promotion. So far, the best entertainment was by Mildred Kalish (Little Heathens). She showed her sense of humor, and instead of reading excerpts in long succession, she made them short and talked in between them about related ideas or events, but not just reading her work. The least entertaining signings are those where the authors are either just signing (as here), where fans provide their own entertainment as they wait, or just reading from their work without inserting much of personal interest (I’ll refrain from naming names in the latter case—suffice to say those are truly boring).

Early November, I attended a signing by Amy Dickinson (The Mighty Queens of Freeville), she of “Ask Amy” fame. The book is subtitled A Mother, a Daughter, and the Town That Raised Them. The town was rural Freeville in upstate New York. As fans were still arriving and choosing seats, Ms. Dickinson chatted with the store owner and then sat in a chair to thumb through the newly published biography of Stephen Jobs. All of a sudden an older woman made a beeline to where she was sitting and leaned in for a hug. Dickinson looked up with a touch of fear, allowed the hug, and asked hesitantly, “Do we know each other?” The woman turned out to be her third-grade teacher from her hometown, who still lived in that hometown but was in Sarasota, FL, visiting her daughter.

Now here’s what happened next. An extra row of chairs was added to the front of the former first row, and two people Ms. Dickinson grew up knowing, were seated in two of those chairs. Guess where she had to focus her attention much of the time. Guess how guarded she suddenly needed to become about what she said about her tiny hometown and the people in it! I felt there was a damper on the event.

After that, I finished reading the book, and it, too, bent over backward to be nice. It was not the book I predicted hilarious “Ask Amy” would write. Then I realized there were, in fact, too many people still in her hometown that she wouldn’t want to hurt in any way. It’s too bad she had to write this book while she is still so young—I mean as opposed to being in her seventies or eighties, when she would feel much less constrained.