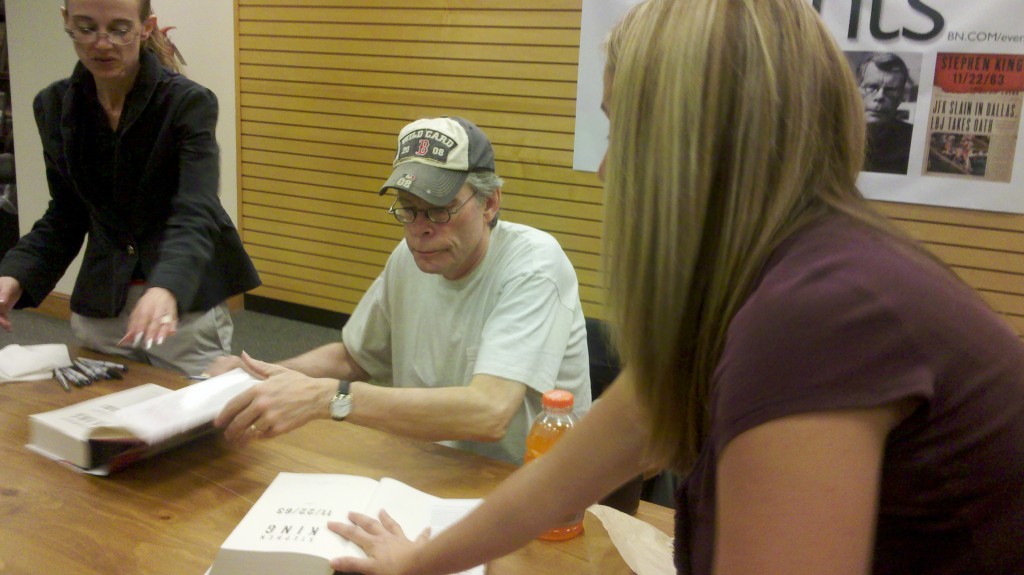 I selected this post to be featured on my blog’s page at Writing Blogs.

I’ve been a fan of Stephen King’s since I read The Shining over thirty years ago. Since then he has thrilled me most with his memoir, On Writing, and also with these other faves of mine: Misery, Dead Zone, Cujo, and The Green Mile. I’m less a fan of his more woo-woo tales, which involve aliens and such (least favorite of all I’ve read was The Tommyknockers), and more a fan of the stories that dig into people’s psychological oddities, although, of course, all his books do that. I’m mainly a fan of his ability to write clearly—you never have to “stop and think” except when you want to—and give the reader a story unparalleled, every time. 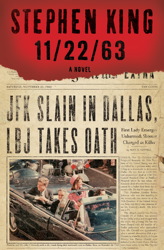 Anyhoo, last night I stood in line with lots of other people (400 maybe?) at the Barnes and Noble in Sarasota, FL, and met the man. He was there to promote his latest publication, titled 11/22/63, which many of us recognize immediately as the date of John F. Kennedy’s assassination. I had lots of time to think about what I might say to him, and I came up with quite a few connections/comments I could have made (we both split time between Maine and Florida; we’re both writers; we both have some history near Lake Kezar; we both saw Ruby kill Oswald; we’re the same age; we go to the same hair salon; and a request from my brother, wondering when SK might be signing in West Des Moines, IA). But I figured he’d heard all that before (except maybe the one about my brother) and so I picked a different one…

In the meantime, while I’m pondering this serious question of what to say, I’m hearing from B&N personnel that (a) Mr. King isn’t feeling well, and (b) there wouldn’t be any time for chit-chat. And, indeed, the line was moving well, and when I thought about him signing as fast as the line was moving, that was proof in the pudding. Finally, about fifty minutes into the line, which had been spiraling in and out of B&N shelf categories (wow, lots to look at!), there he was, ten or so signees away. His handlers were busily lining up the page-readied books three in advance, and taking each from him as soon as his pen lifted, hurrying the signee along.

He looked like hell. You had to ache for him, feeling poorly and yet seeing this commitment through. Between signing the book in front of mine and signing mine, he turned ninety degrees in the chair and craned his head back, presumably to see whether that damn line really had just as many people in it as it had the last time he checked (answer, yes). There had been no chit-chat that I could see; he really needed this to be over. As he put pen to paper, I leaned in and said, “Congratulations on that New York Times review.” He looked up at me, and his face softened, and he went back to writing as he said, “Yeah, wasn’t that nice?” As he finished writing, he said in a dream memory, “I thought I’d died and gone to heaven.” I said, “I’ll bet” – just as the handler to his right pushed the book at me and waved me along, and he was mid-name on the next one.

The quotable line he and I both had in mind from the NYTimes review was: “It all adds up to one of the best time-travel stories since H. G. Wells.”

You may also enjoy this: Click for publisher’s author interview.