Friends and Strangers Can Get People Talking to Each Other 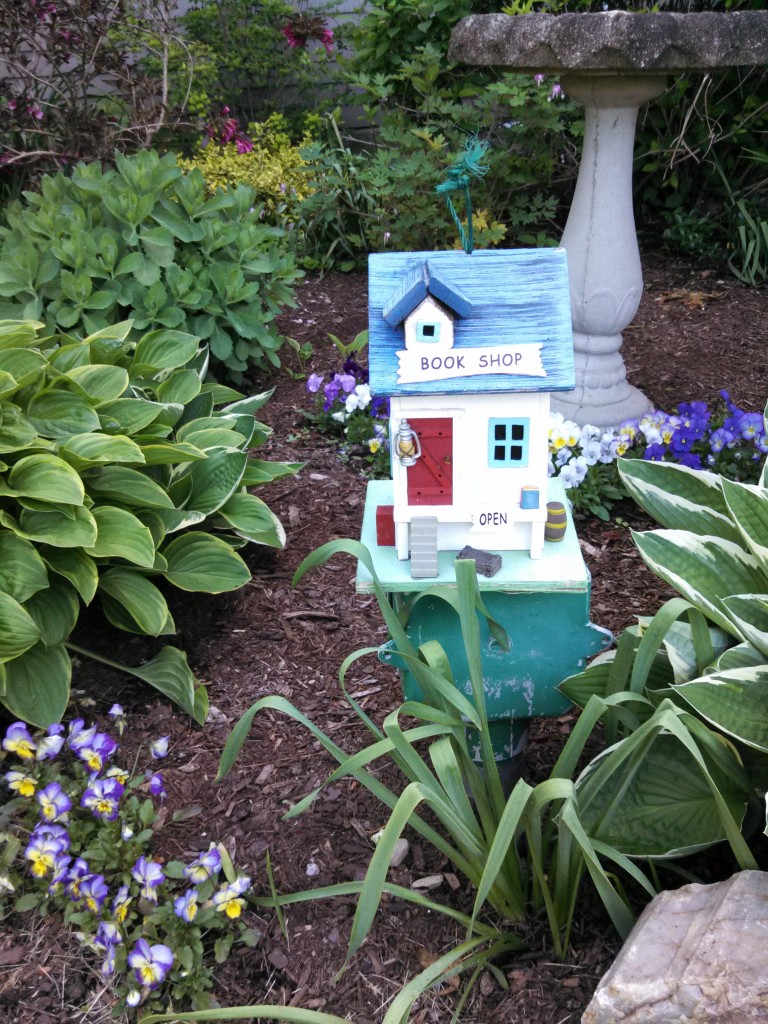 Hubby and I were treated Sunday night to a delightful home-cooked dinner at our friend Anne’s friends Bonnie and Ron’s home—in a heretofore unexplored (by us) location. Our Garmin failed us as we neared their residence, and our sense of direction did, too. But luckily, the hostess had said they were on a circle, so we figured out we could keep going and we’d get another chance at it. I did joke, as we parked in the driveway, that anyone living out in this neck of the woods must want to stay hidden. Imagine my glee, as we walked along their well-tended garden path and I spotted this Book Shop cottage decoration (above). I later learned that Bonnie volunteers at the town library, including creating a whole garden for them.

We had a great time meeting each other, oohing and ahing over several quilts Bonnie has created and the house Ron and she moved/rebuilt/expanded from the original small cottage that sat several feet in front of where it is now. On the interior walls were three pieces of artwork by three artists we also have in our collection (Kim and Philippe Villard have books [thus the mention in this blog] and paintings/woodblock prints, and Jean Swan Gordon [recently deceased] has ink/watercolor paintings). Our mutual friend Anne was right that we would all get along well, though who could have predicted that would include artwork connections as well as personalities. Perhaps a books-connection could go unstated, since Anne and I both gravitate toward readers.

Bonnie and Ron and I were happily surprised to learn, over dinner chatter, that they were reading Denise Kiernan’s The Girls of Atomic City and that I had recently done a review of it. The conversation immediately veered to a discussion of the different times we now live in. In 1943-45 the work at Oak Ridge—building the atomic bomb—was a secret even to most of the people working there, let alone to people “off the Reservation” (as it was called) and around the world. Contrast that to what had happened the very morning of our Sunday dinner, when Edward Snowden’s interview with The Guardian revealed him to be the leaker/whistleblower about the NSA’s use of metadata, unbeknownst to most of the population but now very much known.

Secrets are not kept today, for better or worse. Mr. Snowden has gotten his wish. He certainly got our table of five talking about something we wouldn’t have known to include without his revelation.