About thirty years ago, I swore off veal. I had read a one-page consciousness-raising ad about how calves are treated from birth to death to make them good sources of veal. Imagine my shock the other day when I saw the exact same ad show up again in a magazine I was reading. Say what? I haven’t eaten veal for thirty years and these animals are still being treated like this? How naïve was I to think I could make a difference. 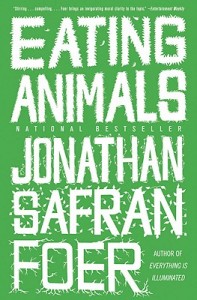 As I mentioned in my June 5 posting, I recently read a book that I knew as I was reading would become life-changing for me. The book is Eating Animals by Jonathan Safran Foer. Foer is a brilliant author of literary fiction—he wrote one of my favorite books ever (Extremely Loud and Incredibly Close). I knew he’d bring that special touch to nonfiction as well. Eating Animals is one of those books that is practically impossible to discuss with someone who hasn’t read it, which makes writing this blog piece a conundrum for me. How much can/should I say and from what angle, and still encourage you to read it for yourself? Here’s what I’ve settled on:

The author says straight out in his lead-in that this is not a book that sets out to make you a vegan or vegetarian. And it’s true. Readers are left with that decision to make for themselves. It’s too bad, I think, that the book is called what it is, since the title itself will turn off way too many people. It’s a threatening topic just in the statement of the topic. And yet the book will tell you everything you ever wanted to know about eating animals. Ah, there’s the rub. Most of us don’t want to know anything about eating animals; we just want to eat the animals. They taste so good.

Foer understands this. He never denies the tastiness of meat (beef, poultry, fish …). He also never hides the viewpoints of meat eaters and meat raisers of all kinds but instead includes them in the book, usually in their own words. It’s a full-disclosure book. What Foer does besides all that, however, is make you read the hard parts as well. There will be tears. When I gave up veal thirty years ago, I had no idea that calves weren’t the only sentient beings experiencing abuse throughout their life. The factory-farming systems in place today are making life for billions of animals every year a literal hell on earth. Foer doesn’t let us off that hook. A major point Foer makes is this: “Our response to the factory farm is ultimately a test of how we respond to the powerless, to the most distant, to the voiceless—it is a test of how we act when no one is forcing us to act one way or another. Consistency is not required, but engagement with the problem is.”

At the same time (still reading?), the statistics about the environmental destruction and threats to human health are equally frightening. If one’s compassion muscle for animals has atrophied, there are more than enough reasons to worry about the human population instead. I urge you to find the strength to read Eating Animals. For my part, I’ve joined Farm Forward. I’ve also ordered two cookbooks to help me get better at cooking without contributing to this overwhelming world problem. If you are as ignorant as I was about the realities of factory farming, I double-dare you to read Eating Animals. You can still be an omnivore and make a difference.