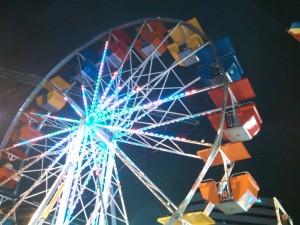 Happy New Year 2015! So here it is, ten days into 2015, and I just noticed that my last blog post was in October 2014. Wha? Guess I’ve been caught up in the lure of speed with the Yours In Books page on Facebook (yours.in.books) and its quick link to Twitter (@yours_in_books). If you have subscribed only to this blogsite, you’re not seeing a host of communications from me. At the same time, I understand if you refuse to get on Facebook or Twitter. Super tools for staying in touch, they are also, indeed, insidious time grabbers. The trick is an iron-willed ability to say no in support of conscious time management. You really don’t have to click on every single video and article link being offered. Just say no. But sometimes say yes. (I’m giving myself a headache.)

On New Year’s Eve 2014 (ten days ago), my husband, brother, sister-in-law, and I ventured downtown for an early dinner at Barnacle Bill’s on Main Street. “Early dinner” means incredibly early – just before 5:00 pm. It was our best shot at getting an unreserved table on New Year’s Eve. We landed the booth, drinks, and meals of our choice and were back out on the street before seven. A cacophony of street hawkers, deejays, music, and children greeted us. Kids screeched as they swung light sabers or flew apart on mini-rides. Other kids were eerily silent as, harnessed, they climbed the rock wall or dared to bounce higher and higher on the trampoline. We looked up and saw the sparkling pineapple that would drop at midnight.

This year, we knew, we’d be sound asleep; we’re finally admitting that being something between ages 68 and 77 means you can go to bed whenever you like and no one will make fun of you. After sighting the pineapple hanging over Main Street, we walked around the block to State Street, where my goal for the evening awaited. One of my bucket list items is riding on a Ferris wheel, and the little carnival offered one. When I announced to a friend earlier in the week that this was my plan, she shivered. “Meredith! Those aren’t safe!” But I look at it the same way I look at riding in an airplane – when you have no choice (which I think is the case with bucket-list items) you just have to play the odds. Luckily, my brother had the $4 in cash on him that neither my husband nor I carried.

New year’s resolution #3 – Carry a bit of cash if you’re going to a traveling carnival.

I enjoyed the ride, but it wasn’t scary in the slightest. So a Ferris wheel stays on my list, but it must be a bigger wheel. I think I’ll stretch that to an analogy for this blog post: Reading novels will also stay on my list, but they must be amazing. Either amazing or somehow “competitive” to the one(s) I’m writing myself, so that I’m constantly challenged to rise to the level of published authors. My goal is to give my readers a few hours of healthy escapism.

New year’s resolution #4 – Read and write, better than ever.

Needless to say, #4 is the only real resolution I’m making. Did you make any for 2015? How’s that going for you so far?