Young and Old and a Goal-Driven Author

In the 1990s I was fortunate to make the acquaintance and eventually become a four-time publisher of Dr. William H. Thomas. Here’s a link to his 2004 nonfiction book What Are Old People For? (click on the book cover on the left side there). Quoting from elsewhere on that publishing site, the below will give you an idea about the man:

Winner of the Heinz Award for the Human Condition and named as one of America’s Best Leaders by the John F. Kennedy School of Government, Bill Thomas is a geriatrician and a visionary with an international reputation as one of the leading authorities on the future of aging and longevity. His honors have also included the America’s Award (established by Norman Vincent Peale and sometimes called “The Nobel Prize for Goodness”), the Molly Mettler Award from the Health Promotion Institute, an award from the Giraffe Project (for sticking his neck out), and a three-year fellowship from Ashoka for his social entrepreneurship work with the Eden Alternative and improving the lives of elders. 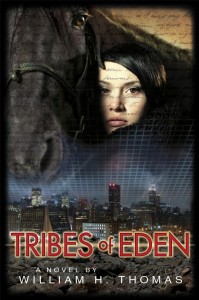 The reason I’m commenting on Dr. Thomas today is that he has published a new work of fiction called Tribes of Eden, which is now available as a paperback (it has been available as an e-book for several months now). I just placed my order with Amazon. Here’s a blurb about the book: “On the run after America’s sudden and utter collapse, a family finds sanctuary in the heart of a community thriving ‘off the grid.’ But when the lure of a virtual new world order divides the family, the elders of the community recognize that humanity’s fate rests with a chosen girl and a surprising alliance between the least powerful — the young and old.”

Although The Hunger Games has the spotlight now, you may want to recommend this less-violent story to the young adults in your life. I have a feeling it is a story that they will carry forward with them. The trailer is below.

This entry was posted in Book Publishing or Selling, Books and Authors, In the Headlines and tagged book trailer, Hunger Games, off the grid, social entrepreneurship, Tribes of Eden, What Are Old People For, William H. Thomas, young and old. Bookmark the permalink.