Adam Davies, Hard at Work and Loving It

The book I bought

Yesterday I bought another book at Bookstore1Sarasota in order to have the author sign it after his appearance there from 6-7:00 pm. I bought Mine All Mine. I would have bought his book Goodbye Lemon as well, because I love the title and because it got good reviews by “those in the know,” but it was not in stock. The employee behind the cash register told me it had sold out, but I have a feeling there hadn’t been very many in the store to begin with. Otherwise, why would he have said, “What did you say the title was?” when I repeated it, and then have to look it up–even though the author was there to speak that day. 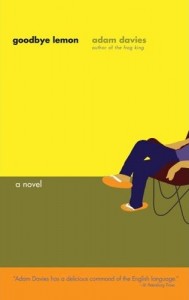 image grabbed from The Review Revue

And then today I went to grab a picture of the cover, and even the publisher’s site (Riverhead Trade, part of Penguin) had no picture of it… I finally found this one on a blog of reviews (credited under the picture). I could have “grabbed” one from Amazon, for instance, but they have that “Look Inside” label that would have downloaded as part of the picture, and I’m not here to grab Amazon’s proprietary art or to promote Amazon over some other bookseller (especially not my beloved Bookstore1Sarasota).

Now I am, trust me, not ranting against the bookselling or publishing industry. I think both industries have all they can do just to keep up with all the demands on them at the same time as they are keeping up with all the new titles being promoted on a daily basis. But I imagine two scenarios that feel possible: (1) the book is going out of print or there is a new cover design underway, or (2) I may be seeing some evidence that publishers are now expecting authors to have their own websites, and in that assumption the publishers may be neglecting to keep their own sites completely up to speed.

Back to Adam Davies. (He has a website adam-davies[dot]com, but it could use some updating–I have a feeling he would rather put his time anywhere but there.) His debut novel was The Frog King, and that is the book he read from as part of the presentation yesterday. Davies is an entertaining reader of his own pages. You can tell he gets a real kick out of his characters and their situations.

photo possibly copyrighted but I don’t know by whom

Currently he is an adjunct assistant professor of creative writing and writer-in-residence at the New College of Florida and loving the job. Some of his students were in the audience, getting a different perspective on him than the classroom can deliver. I’m glad I met him, introduced myself, and had him sign my copy of Mine All Mine. I’m looking forward to reading a novel by a young man who enjoys writing about people and relationships but has a wholly different world experience than mine (including, I’m so jealous, living awhile in New York City) and with three novels successfully under his belt. From what I’ve read about him and his books, he is coming into his own and someone to watch.